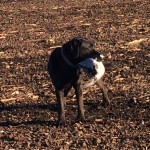 Everyone loves a good gadget and ones which actually work are particularly satisfying. Pigeon shooting seems to have more than its fair share of gadgets and I have been using a few recently helping to keep pigeons off some of the pea crops which they seem to find so attractive at this time of year.
The Silosocks rotary “pigeon magnet” has proved particularly effective at bringing the birds in so that their pea eating career can be brought to a permanent close. It consists of a very small pole mounted electric motor driving two springy arms. The real secret to its effectiveness are the decoys on the arms which have specially designed wings which flap then glide just like a landing pigeon. They are so realistic that on a number of occasions catching a glance of it has had me reaching for the gun. Have a look at the video here and you will see what I mean.
I have also been very pleased with the wind sock pigeon decoys which are in the video clip. They bob and move in the wind with surprising realism and are very light and compact to carry.
If you are pining for the last gamebird season but don’t have access to pigeon shooting book a time at Hau Ora Clays and come and shoot some clay ones instead to keep your eye in. Call Paul on 021 680053 or email paul@handsome-apparel.flywheelsites.com to book a time.

“We all had a great weekend celebrating my parents 60th wedding anniversary and I know for a fact that the shoot was a highlight for all those that took part and everyone’s results were well talked about. I only heard really positive things about it……so thank you. They said it was extremely well organised and you personally were a great host. “- Helen O 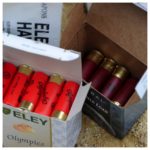 It can be difficult to self-diagnose your shooting problems. We assume we're shooting in front or behind a target but often we're above or below … END_OF_DOCUMENT_TOKEN_TO_BE_REPLACED